skip to main | skip to sidebar

First of all, we want to thank all those who have supported us through the last few weeks and with the funeral. It was great to see so many people come to the viewing and funeral. It was a great tribute to my mom, but also a great comfort to us as a family. Thank you for all the many kind words that have been sent as well. I know some weren't able to make it to the funeral and I (Kara)wrote about it to John in pretty good detail, so I thought I would post that portion of my letter:

We had a display set up in the primary room. There were two bulletin boards in the back - one displaying the quilt from the Relief Society and the other displaying all the many cards we received. The we had a bunch of different tables. There was a long table in the middle that had large pictures of her as a baby, 8 year old, high school, college and wedding pictures. Surrounding those were small tables displaying her hobbies. One was a "librarian" table, one was a "music" table, one was "doll/sewing" table (that had Jenny's wedding doll, my baptism doll and your doll), one was a "travel" table (with some bells and pictures of us on vacation), and then there was a "family" table which had our scrapbook that we gave mom along with a couple of family pictures. Also in the primary room were the two videos that Brian made and some chairs where people could sit down and watch while they waited. In the Relief Society room we had all of our nice family pictures from the living room and family room. We also had a picture of you and a big picture of mom. There was tons of beautiful flowers. Dad's was a heart with read roses. The one from the children were yellow roses and daises. I asked Chantel to make a little pillow for mom (which you'll see in the pictures) and it was so cute. It really softened up the harshness of the casket - I thought. I only asked her the day before and she stayed up all night doing it. We all wore yellow - we really weren't planning on it that way, but it just came together and I'm so glad, it was so nice and cheerful. Mom had bought yellow dresses for the granddaughters in Febuary, which they wore. Then I had a yellow shirt, Jenny a yellow skirt and Wendy a yellow cardigan. All the boys had yellow ties. It was so nice. The viewing was supposed to be from 6-8, but it started about 5:45 and didn't get over until after 9:00 - there was a long line the entire time. The funeral was perfect - a little long, I guess - but still so nice. Jenny and I did a life sketch. Nathan's talk was very nice - he incorporated your words as well. All the aunts, uncles, cousins, and great grandchildren sang a medley of primary songs: I Love to See the Temple, Families are Forever, Teach Me to Walk and I Wonder When He Comes Again. Then all the children (and spouses) sang my arrangement of Where Can I Turn for Peace. That turned out beautiful as well. We were determined to get through it without crying. We said a prayer before hand and it was just right. Then Pres. Tippets spoke, Elder Pinegar and the Bishop had a few remarks as well. Afterward there was a lunch which was so nice. There were about 200 people there (for the lunch). For the funeral - it went back and filled half of the gym. Then we kind of had to hurry the cemetery to be out there by 4:00. When we got there we realized there was a huge mistake. I guess there was another burial near mom's earlier that morning and they buried that person in mom's grave. Kind of weird. Dad went ahead and dedicated the grave and then insisted that the cemetery fix the mistake that night. Aunt Carolyn had reserved a church to visit in afterward (especially for all the people that came from Arizona). We went and hung out there, but then Dad and Nathan went back to the cemetery before they buried the casket to see for themselves that it was in the right spot. Dad was good about it, but he was little stressed at first. Naturally. All in all it was a good day. It was wonderful to have the love and support from so many people.
Posted by Norene's Family at 11:03 PM 1 comment: 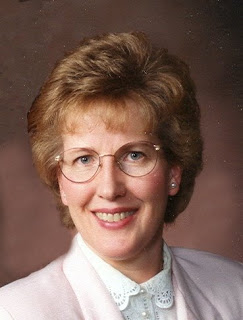 Norene Sagers Southwick
7/27/1954 - 4/3/2009
Norene passed away peacefully at age 54 surrounded by her family after being diagnosed with lung cancer five weeks earlier. She was born in Tooele, Utah to Willard and Geraldine Sagers, and was married to Wayne Southwick August 23, 1974 in the Salt Lake Temple. Norene was dedicated to her family. She taught her children and others to live the gospel, love music and learning, and enjoy life. She exemplified charity and compassion as she served at home, at school, and in the Relief Society and Primary.
Her legacy will continue through her loving husband, Wayne; children, Nathan (Wendy), Kara (Brian) Allen, Jenny (Bryce) Lake, John, Brian, and Kyle; six grandchildren; five siblings; and mother. She was preceded in death by her daughter, Melynn; father; and brother, Kenneth. Services: L.D.S. Chapel 1899 W. 7600 S. West Jordan, Utah. Viewing: 4/8 6:00-8:00 pm and 4/9 10:00-11:30 am. Funeral: 4/9 12:00 pm. Internment: Tooele Cemetery.
Posted by Norene's Family at 5:48 PM 1 comment:

Norene passed away peacefully at 6:45 this evening, surrounded by her family. She had a chance to say a few words to John earlier today. We will let you know funeral arrangements when they are made.
Posted by Norene's Family at 7:34 PM 9 comments:

I hate sitting down to write a blog like this, but I know a lot of people out there are wondering how Norene is doing. Unfortunately, right now she is not well. Ever since Friday, things have been going downhill fast. She is so weak and not feeling well. We had a little problem with the tube that is draining fluid from her lungs. It broke and we considered going into the hospital to get a new one. Dad, Nathan and the nurse were able to jimmy rig the one she had back together and it seems to be serving it's purpose again. We are grateful for all the prayers and would ask you would pray for Norene to feel well enough to enjoy the remaining time that she has.
Posted by Norene's Family at 10:15 PM 3 comments:

Yesterday was a little better for Norene. She was awake and alert most of the day, and was able to dictate more of the letters that she is trying to write to her children. We also had some visitors again yesterday, and Norene was awake for all of them. :) On the downside, our best efforts have not seemed to really stop the growth of this fast growing cancer. (Originally, she was diagnosed with more slow growing cancer, but the second report showed a very aggressive type of cancer). If you haven't had a chance to visit Norene, and would like to, give us a call and we will let you know if she is awake. If you do come by, we ask that you only stay for a few minutes. Thanks for all of your support.
Posted by Norene's Family at 10:03 AM 1 comment:

The last few days have been somewhat difficult. Ever since the incident on Friday, Mom has been extremely tired and weak. She is only alert for a few hours a day - most of the times she just sleeps. It does seem to be more restful sleep than she has been having, which is good. But she is in much more pain. When mom is asking for pain killers, we know she is in quite a bit of pain because she has a high tolerance for pain and she is not one to take pain pills. We have thought that perhaps it is the heart medicine or the pain medication (although it's not very strong) that may be making her so tired. She said she wouldn't mind having visitors on Sunday, but felt bad that she slept through every one of them. I am glad that all of her siblings were able to come and talk to her on Friday while she was still alert.
Posted by Norene's Family at 9:37 AM 2 comments: 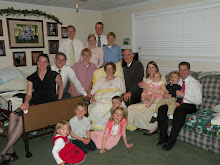